How Sustainable is Hydrogen-Economy as a Green Energy Resource

Hydrogen-Economy as a Green Energy Resource

Worldwide nations are talking about the hydrogen-economy, however, the primary concern, for this most abundant energy generating element, is its workability.

Hydrogen-Economy (a system proposed to generate energy using hydrogen) can surely be considered as sustainable if it enables the world to eliminate their dependency on foreign oil sources and provide a pollution free environment.

Basically, it must be able to cope up with the increased population, augmented usage of energy technology, modifications in politics, and altering attitude of individuals toward the environment as well as toward the welfare of future generations.

Economists forestall that worldwide energy consumption is likely to get doubled by the year 2050. It’s, however, unlikely that the rapidly declining stocks of fossil fuels could match-up this huge demand, so new energy resources are critical.

Currently, the principal hurdle to adorable hydrogen-economy is the techniques used to extract hydrogen (from larger molecules) depends on electricity, while electricity is mostly generated using methods that spread pollution. If hydrogen is extracted using electricity from a coal power plant, it will not matter that the hydrogen fuel cell doesn’t harm the environment, because the pollution already occurred during the hydrogen extraction process.

Therefore, it’s important that the electricity, used for extracting hydrogen, needs to be produced using a non-polluting source, like solar power. Only then hydrogen can be considered as a pure-green energy resource. At present, however, this usually isn’t the case, so the sources of power generation need significant modifications for making hydrogen-economy, a sustainable option.

What’s the Other Concern?

Storing hydrogen fuel is an issue, as it is stocked in compressed liquid form and gets evaporated over the time. If a hydrogen car is parked idle for long, the evaporation losses will considerably increase the overall fuel-expense. Also, compressing liquid hydrogen to a volume – that can be carried in a car – requires more energy. This energy, however, may have been generated from pollution causing methods.

According to the experts, enhancements in hydrogen production methods and its storage may ensure a sustainable hydrogen-economy in nearly 15 years to 30 years. The adversaries of the hydrogen-economy, however, believe that such an economy can never be sustainable and that the available resources should primarily be utilized for exploring more means of power generation.

That may seem to take years to clearly understand whether hydrogen is the fuel source of the future.

Why Wait for Years!

While worldwide intellects are busy understanding, how to utilize hydrogen as a sustainable fuel-source, inventors like Mr. Harlo Mayne (from Jamaica) have already innovated and introduced the futuristic solution, which is actually sustainable. 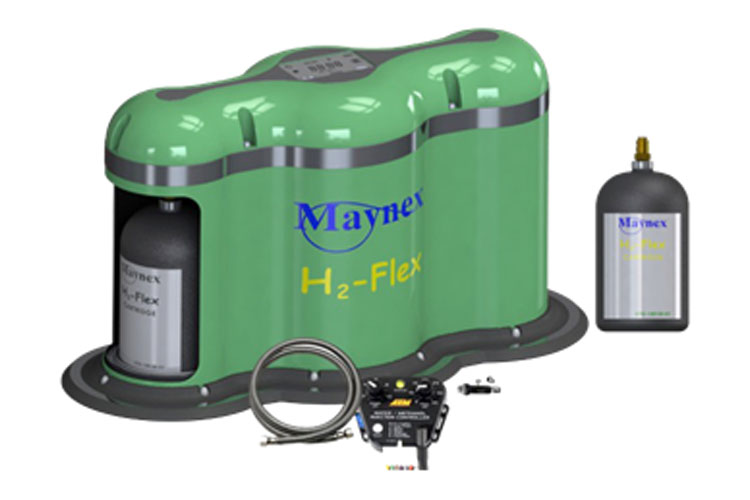 Encouraged by the thoughts of protecting our climate as well as to save the world from the predicted global oil and energy crisis, the award-winning researcher, Mr. Harlo Mayne, has unveiled an advanced green system for the world. Branded as Maynex – H2-Flex, this patented technology can run the car from water – as a pure fuel-source. The H2-Flex converts water (even the muddiest of waste-water) into 100% clean hydrogen gas, through a chemical reaction with aluminum. The smart system generates 130-octane hydrogen, which means more horsepower to the car’s engine.

The H2-Flex even enhances the car’s engine life, as it cleans the vehicle’s engine while driving, thus ensuring lesser spending on the maintenance. Not just that, the H2-Flex eliminates harmful carbon emissions, as the car’s tailpipe emits water vapors, which fall back on the earth as rain, reducing global warming and drought conditions.

This way, the H2-Flex ensures a pure and healthy environment for the generations to come.